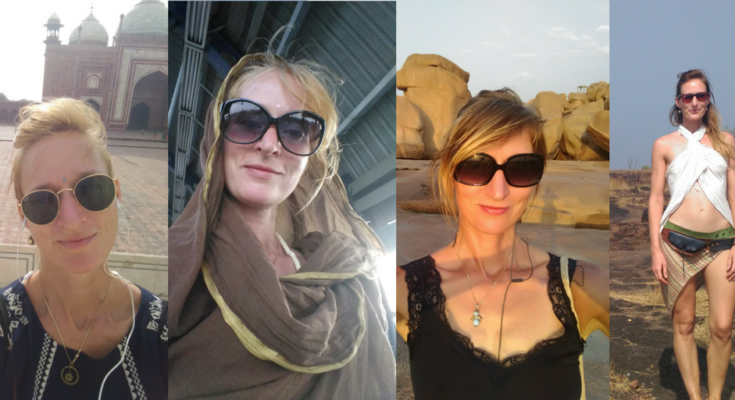 Year-end is approaching, I hear the call for integration louder than usually. And the idea of this post came to me so long ago anyhow. When I first started to select my photos and found one reminding me how I lost one of my sunglasses. One of those many pairs.. 🙂

The first pair of sunglasses, which just became worn-out

So… I sarted my Indian journey which was originally planned for 6 weeks, with 2 pairs of sunglasses, knowing that so many things can happen to sunglasses in such a short time. When I left my first station, Auroville for Goa, I didn’t really know what to expect. I knew that I will be hosted by two Hungarian guy but had no idea about the accommodation and not much about Goa either. Of course colourful pictures were wandering in my mind about hippie communities, psychedelic festivals, different states of mind, getting far from reality, so for any case, I left some of my valuables (my notebook and debit card, etc.) behind in my guesthouse in Auroville, where I planned to go back in a week. While I was in Goa, I supposed that one of my sunglasses is hidden in the package left behind in Auroville. And the other one became so many scratchy after two weeks (well, the planned one week became three) spent on the motorbikes, the sandy beaches and in my textile bag that  I decided to buy a new pair. I left the old one by the stall where I got the new pair. 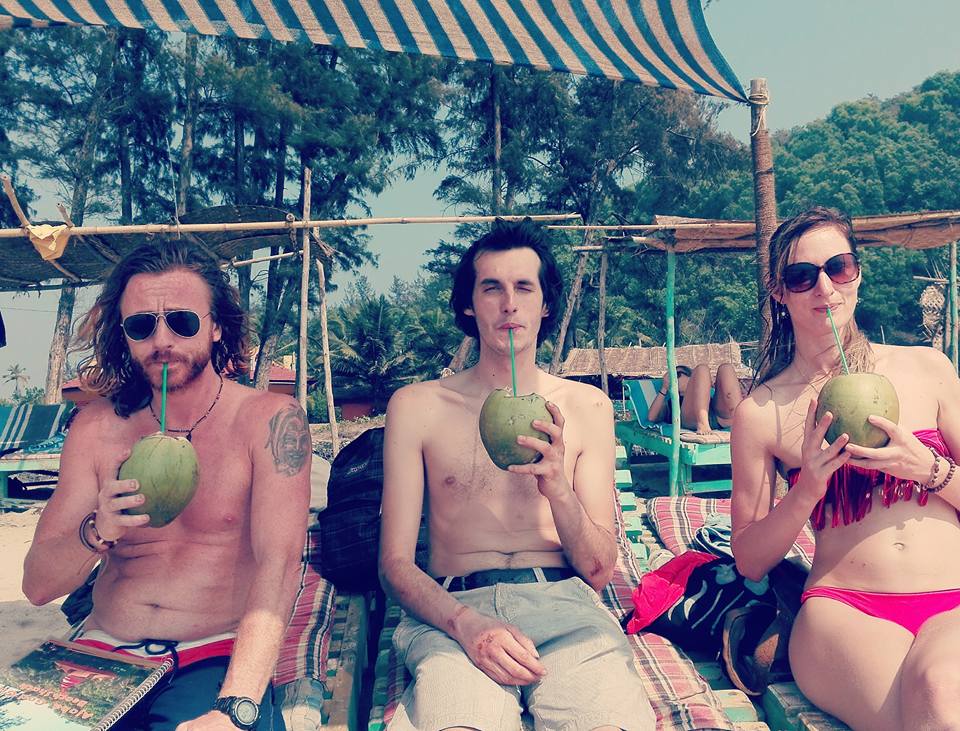 The second one, which got carried away by the ocean in a few hours

This pair of sunglasses represented it in the most authentic way how short the life of sunglasses is at me. As soon as we got this pair of sunglasses with my Indian friend, we were walking up to the platoue over the little jungle, then down to the beach, into the ocean and cc the fifth wave carried away the sunglasses applied to the top of my head. I don’t remember exactly how much it cost, somewhere between 500-1,000 HUF. We soon ot back to buy another pair which was cc the same model, just in a different colour. 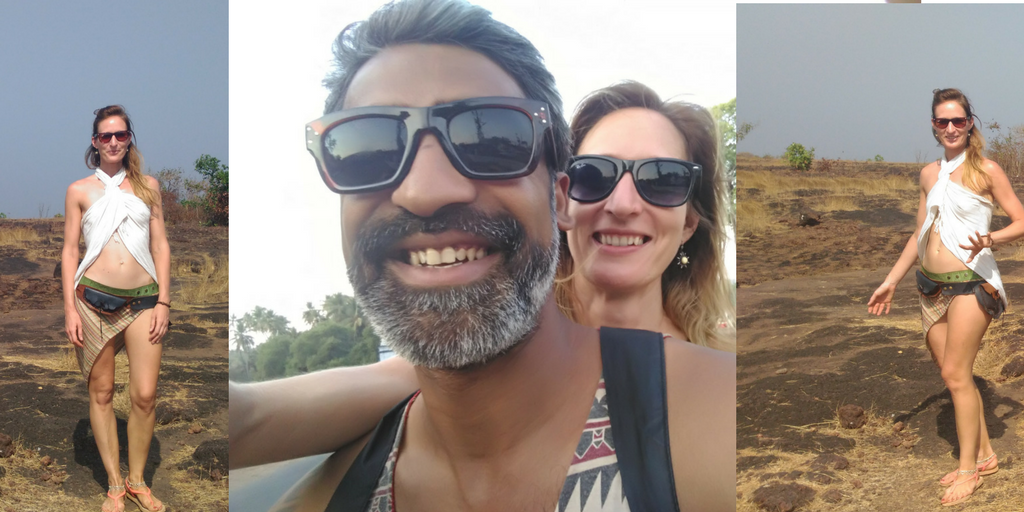 The third one, which I gifted to my sweet bike-rider

When after three weeks, finally the time came to say good bye to Goa, my Indian friend left his sunglasses in a restaurant and since he was giving me a ride to the private bus stand in a city nearby, he really needed sunglasses. We stopped to get one but they were so expensive right there so I rather decided to give him mine. As the one riding the bike, he definitely needed it more than me. This is how I got rid of the third one.

The fourth one, which was left with the little girls in Rajahstan

I took the bus from Goa to Bangalore, where I soon realized that I have the spare pair of shades brought from home, which was travelling with me for quite long after this. 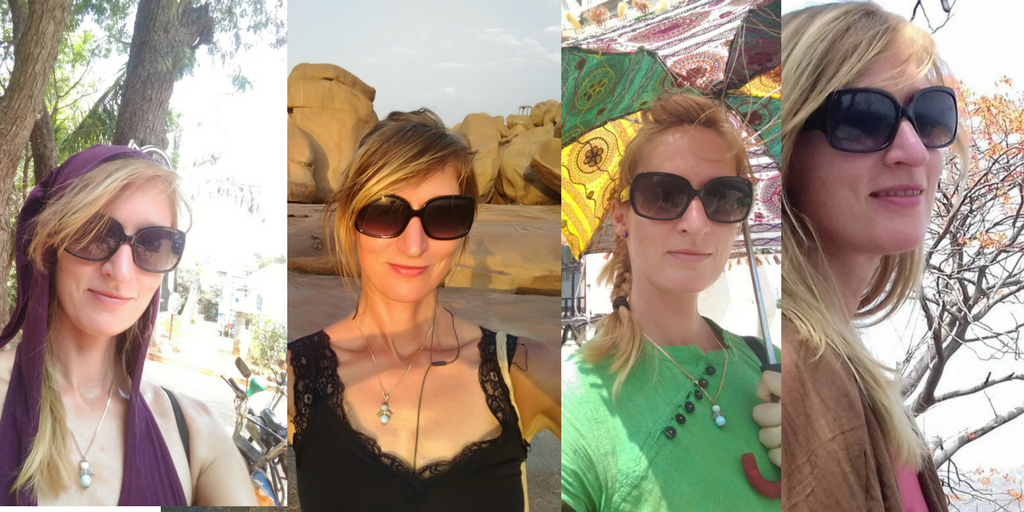 As long as after cc two months in South-India I started my journey to the Himalayas and stopped in Rajahstan where an Indian friend of mine was working as a swimming pool attendant at a swimming school, where I made friends with two little girls living next to the swimming school. We didn’t speak a common language but we could still offer some fruits to each other, I could explain them that I am not happy if they are killing the ants, they could join my yoga practice by the running track, we could communicate with some animal sounds and screaming and they were happy to play with my sunglasses. 🙂 I realized it some time after we said good bye to each other that I left y fourth pair of shades with them. Once it crossed my mind that I should go back for them but I soon let it go and on my last day in Rajahstan my friend gifted me one.

The fifth pair, which I got as a gift

So I got this pair as a gift. I was happy to receive the third Indian fake copy of the well-known brand – I was thinking. Until a few days later in a beautiful morning in my next stop, in Agra I just finished my visit in the Taj Mahal, with dancing steps. Maybe I was already writing about it that my visit to this wonder of the world started with the tears of being so touched and ended with a real dance of joy in the small side-rooms of the Taj and as I was drunk with dancing, enjoying the sunrays, I fixed my sunglasses and I realized the tiny letters carved in the black lenses, referring to that brand. I became aware here and then that my not too wealthy Indian friend gave me a pair of real Ray-Ban. I was taken by another wave of being so touched and also faced the question whether it was right to accept this gift? I could write long about this question, these controversial relationships between Indina gentleman and European female travellers. Such relationships are not free from personal interests at all but still show a lot of mutuality. Maybe I will write about this but not now. 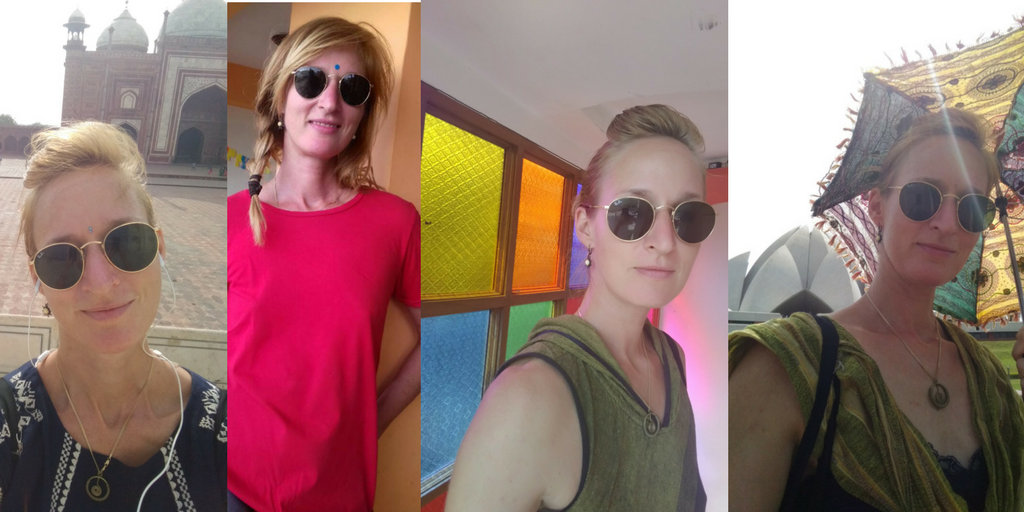 Now let’s stay with the case when I became owner of a pear of real Ray-Ban sunglasses for the first time.  These sunglasses were travelling with me all the way to the Himalayas, Delhi and Nepal. Until one day when in the darkes period of my first visit to Nepal (when for a few days I was resting in a dusty little town by the Indian border, waiting for a friend so that he can take me in a let’s say unofficial procedure through the land border to India with my e-visa which is only valid for travelling to India by plane ) I got on a mini bus to Lumbini. So I was on this mini bus where much more people could not fit in and where opposite to me, a few 10 cm-s from me there was a drunk Nepalese young man sitting. He started to flirt with me, to which I first replied with my most hostile look and when it was not enough with my voice becoming louder and ruder. In the meantime I became so angry that  all way long, even when changing for another bus I fret and fumed with intense arm movements, until the point when I finally arrived, I got my dirty backpack from the top of the bus and I realized that the sunglasses fixed to the neckline of my dress are gone. At this time this loss semt to be anything but too important so I accepted the loss with the calmness of a Zen buddhist, admitting that in this world everything is just coming and passing by, especially material stuffs.

The sixth one, memory of my shopping spree in Delhi

A few days later, after the intense and dark days in Nepal I was more than happy to arrive back in India, where I soon headed for a shopping spree to buy a new pair of sunglasses and to refresh my set of underpants, consisting of cc 7 pieces used and handwashed for 6 months by this time. Well, after looking into some shops I soon gave up the latter plan after it came to light that in India it is a rather big challenge to buy underpants which don’t look spookily similar to the underwear I used to wear before turned the age of 10. And in addition, in the country famous for its conservative view in the field of sexuality in most of the lingerie shops there were male shopkeepers showing the underpants, which were not on display but hidden in some set of drawers in the shop. I found this situation more than embarassing.

Luckily it was much easier to buy sunglasses. I successfully purchased my last pair of sunglasses, travelling with me from this time (July) almost until the end of my journey, I lost them somewhere in one of my last stops, in the guesthouse in the Himalayas, after I arrived. 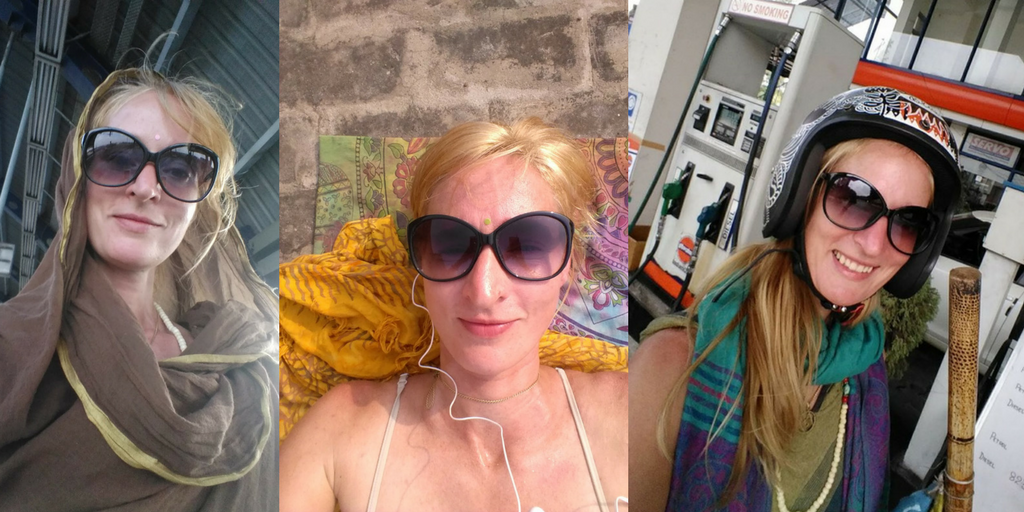 Since they were still in my pockets when I arrived, it was quite obvious that they are somewhere in the guesthouse but since they were not so necessary by that time and I also became kind of a master in letting material losses go, I didn’t put too much energy in searching. And this is how the story of Indian sunglasses ends, with letting go. This is the main message for me. One of the main messages of sunglasses and also of all India. By now I am mastering how to let go material losses so well that I feel it is time to invite some discipline to have less things to let go. 🙂 Looking for balance in this field too, like in all other fields of life. For the practice, life is providing the playground and the new days are providing new challenges. 🙂 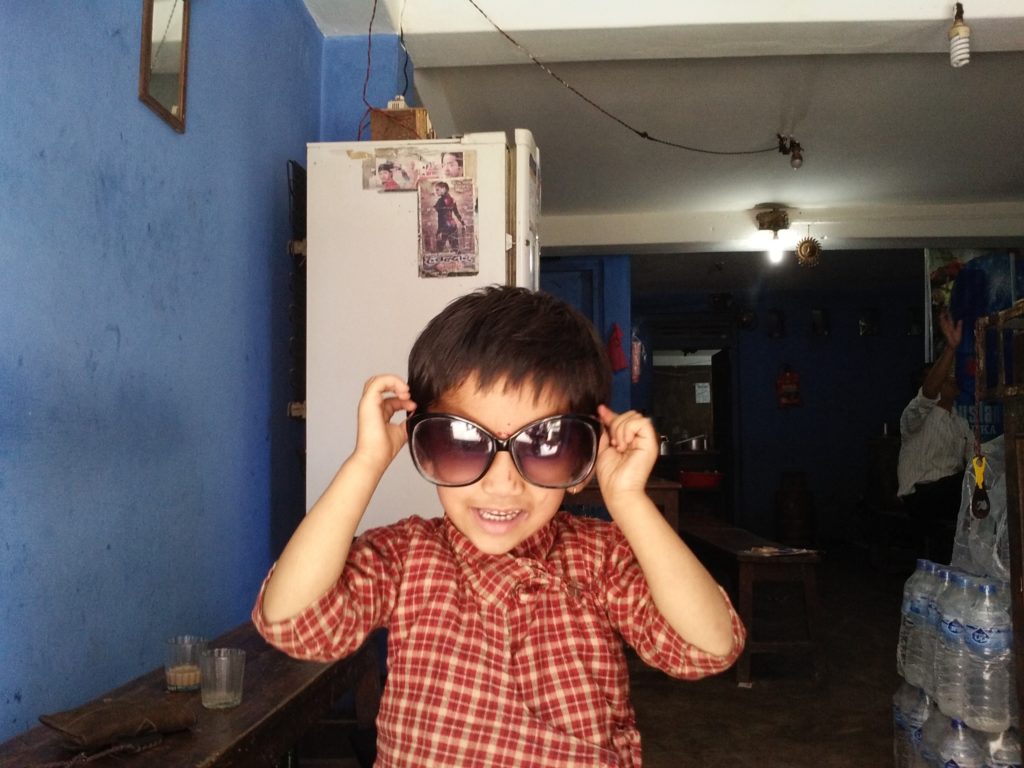