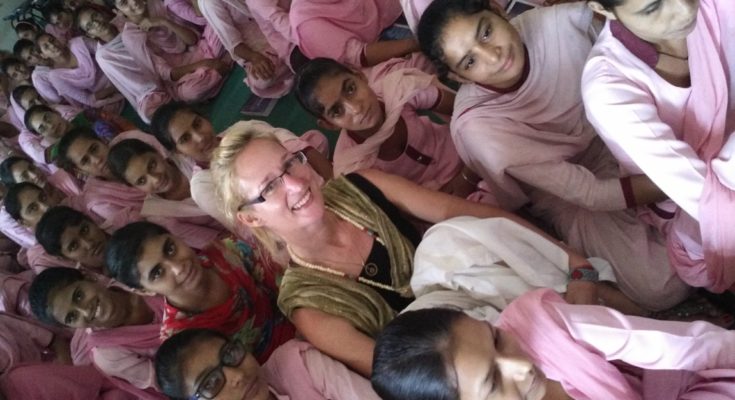 A few days ago I started to talk with a friend of mine. With whom I already shared so much about my travel experiences, so honestly. About the places I stayed, what I received, what I gave, the people I met, the people I had connections with and how I experienced these connections.

At one point my friend said: I wonder what the Universe wanted to teach you by putting you in such a receptive role on the long journey?

The question couldn’t have gone deeper. In a second I found myself in January 2017, in Auroville, where I once went on a walk. My first walk when I took of my slippers and connected to the magical red soil of South India barefoot. I was walking on the path where nice hand-painted stone boards are teaching the core values of Auroville, each represented by a flower. All of these are so beautiful values, meant to provide a framework for this independent community reaching beyond traditional social schemes, legislation and religions. When I finished the walk I felt I need to choose the value which was the most relevant for me at that time. It was receptivity. The wisdom relating to receptivity was:

Flowers are very receptive and they are happy when they are loved. 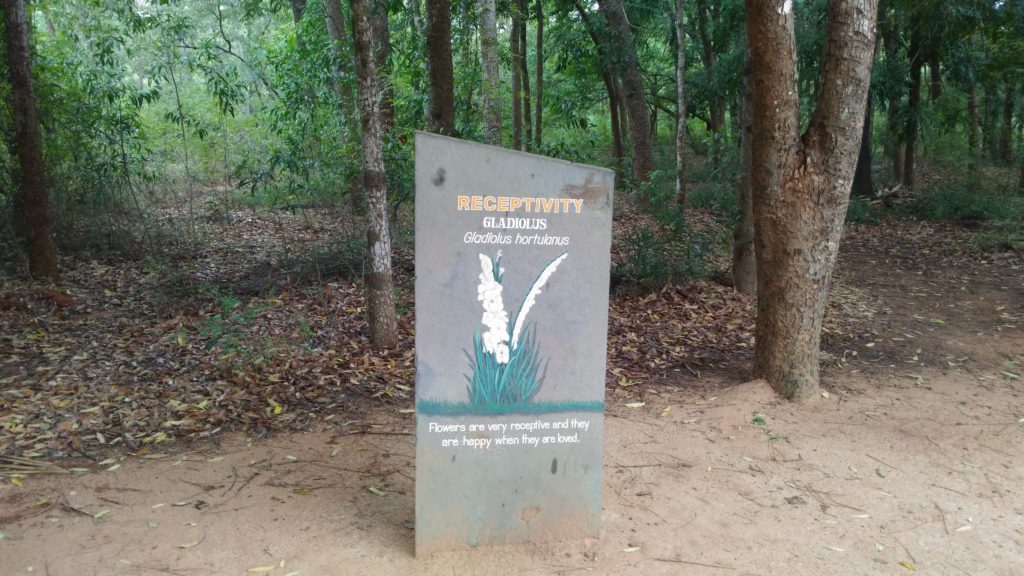 This photo was on the screen of my phone until I lost my phone in June. 🙂

Why could this message touch me so deep that time? Because it suggested that it is so so natural that we are longing for love. That it is absolutely all right. Earlier one of my most frequent self-loathing mind patterns was exactly that it doesn’t matter how many people say to me how nice and kind I am, I was so nice and kind only because I wanted to be loved.  Yes, in the background of my kindness I always discovered this selfish interest to be loved. And for this reason I felt my kindness fake. How many times I was talking about this with my beloved therapist. And here on my first walk I found this board with the message that it is the most natural thing in the world that I wanna be loved. And I receive 🙂

In addition, I know that receptivity is one of the most basic female qualities (passive, receiving), as opposed to the basic masculine qualities (active, expressive). And in addition, as looking back to the first 31 years of my life, as a child I used to be always more serious and responsible than my age (more masculine), until I found myself in a relationship following me almost until my 32nd birthday, where in the everyday life I also represented more of the masculine energies even if I was fragile. 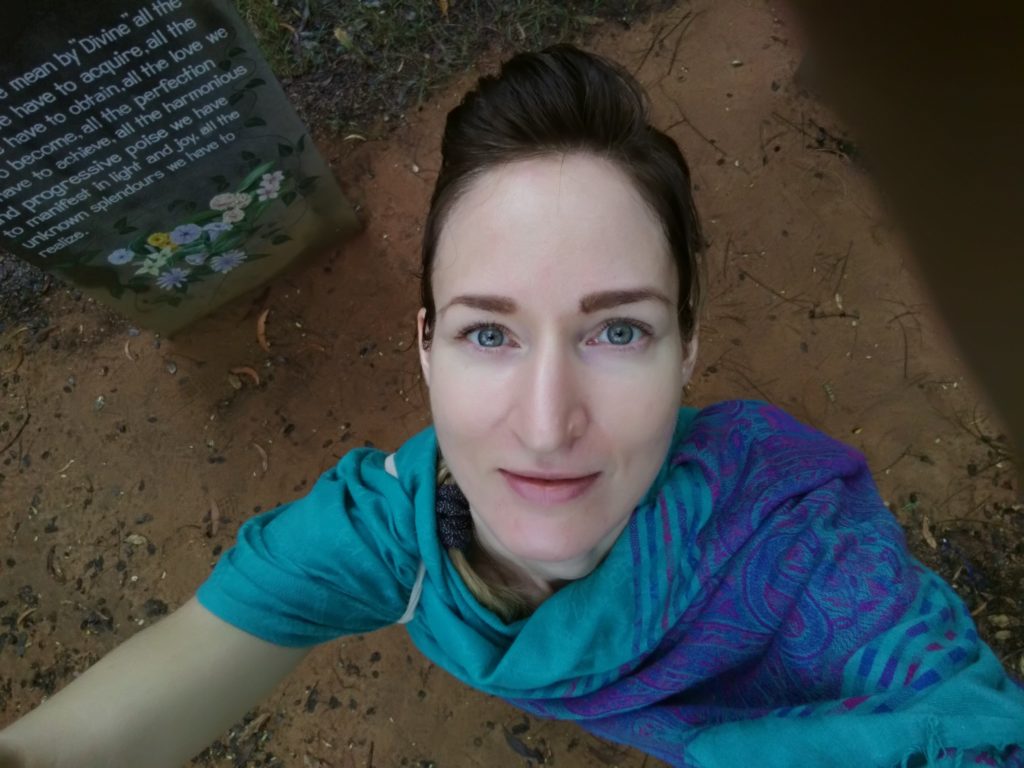 And what happened after I set my intention to focus on receptivity above all? The Universe offered me a thousand opportunities to practice receptivity. And I took these opportunities. It was like a miracle.

It all started by me deciding to stay in India. I had the courage to make this decision because of this young man whose name means by the way “Faith” and who told me he was about to start up a new business in the Himalayas, and would be glad to involve me too. Of course we knew that we would go on a separate path for a while and we didn’t knew what the time on separate paths can bring into our life. I had a lot of fear. I felt vulnerable and dependent on him. And then after we said good bye to each other, I started  in Bangalore where I originally arrived for a day at his friends’ place and ended up staying there for a week. His friends took care of me like I was family.

Afterthat I went on a Vipassana meditation where I paid only a moderate amount for the accommodation and food. My next stop was in a payed guesthouse where I didn’t pay attention to the details and I didn’t notice that there was also a not too moderate amount of tax levied. When I had to pay, first I got pissed off then the penny dropped but in the meantime my host (who by the way wanted to have closer relationship with me) offered me remitting the tax. I accepted, even if well, not with a good feeling. Afterthat, I was a guest in Bangalore for another week and then started to volunteer for a few weeks. 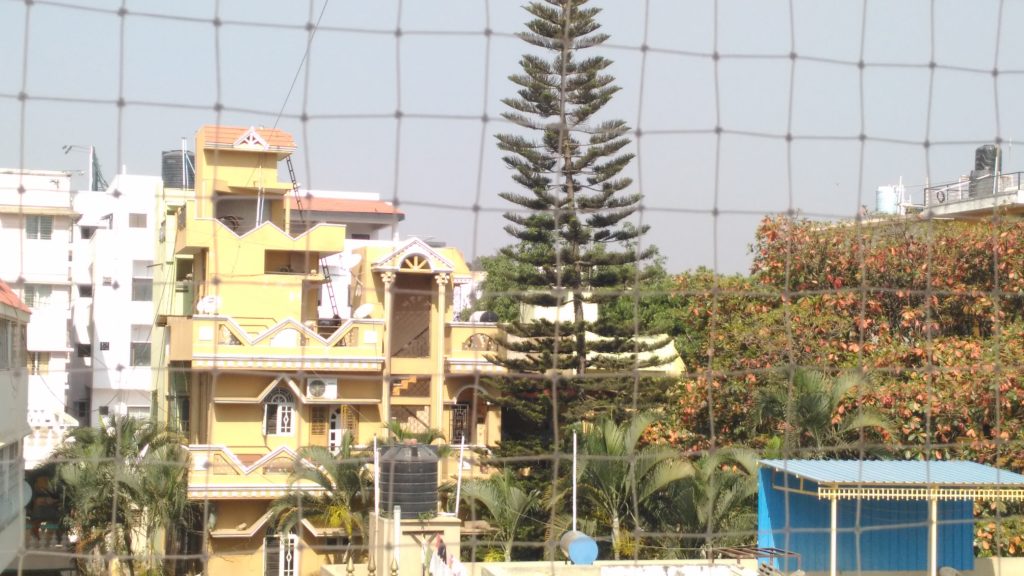 And it went on like this. At some places I stayed with friends, at some places I was offered a place by the man with whom we were just sharing the joy of discovering life and each other.

I just realized while writing this post that in the big cities (Bangalore, Mumbai and Delhi), where the hotels were expensive, I actually didn’t need to pay for anything.

Maybe the most extreme situation was when I spent 6 weeks in Punjab at a family who I never met before, we only had a friend in common. A guy, who I only knew for a weeks before and who used to be the student of the father of the family. And the other most extreme thing: my friends in Hungary moving me out from my apartment while I was in Nepal…. Well, I don’t think it could have been possible to fit in more experiences in these nine months to enhance receptivity, the most basic female quality. Although there were many cases when I also gave from my heart if I need to sum up my travel, there is no doubt that these nine months was about me being a woman. At least under the surface. Being a flowing backpacker, the surface was not really about celebrating that I am a woman.

Nevertheless, the female flowing had its dark side too: most of all, loosening up my relation to reasonability. So to speak. The top of this was when on September 10, I was about to leave India and I realized it right there in the Indian immigration office that my visa expired one day ago.

What is the lesson? It is time to re-balance. I need that masculine side next to the female one. I am starting the next phase of my travel with this in my mind, in Hungary. 🙂 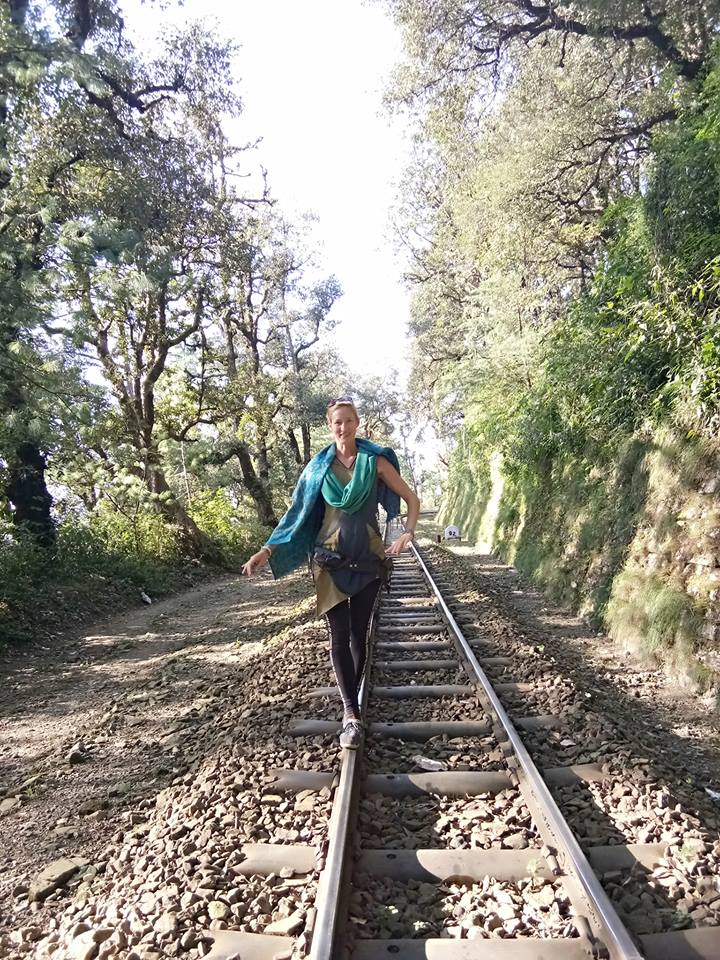 2 Comments on “Thank you Mata India – Part 1: Thank you for the female energies”