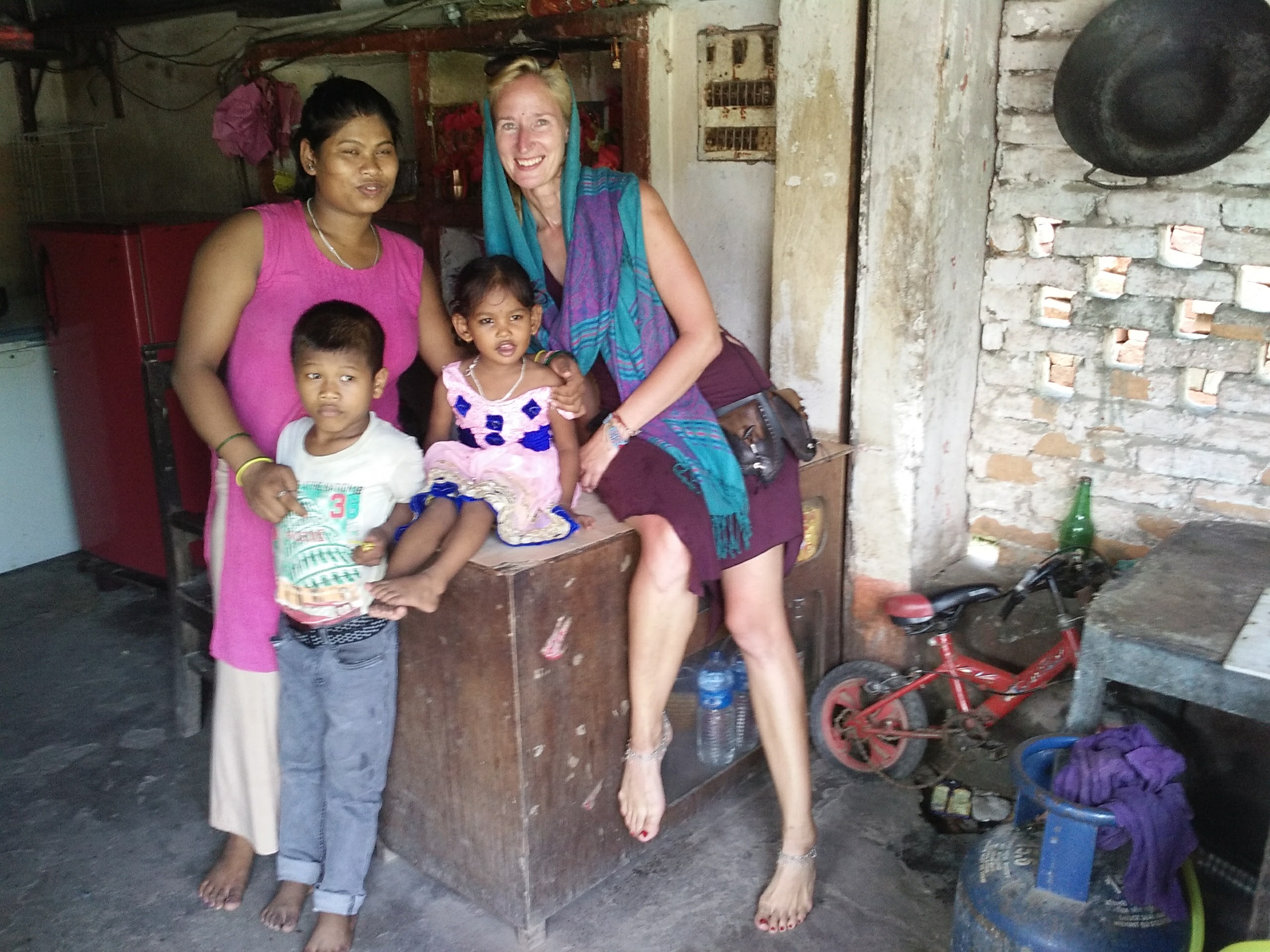 So on the 6th of September I jumped on a motorbike behind a Malaysian world traveller who I met  few days before and we left for Nepal. What a nice trick of the Universe is that a few weeks before I had told to my Russian friend that in early September I wouldn’t advise to got to Nepal on a motorbike because the monsoon may still be on. And a few days before I had been so worried about the floods near the Ganga that I had been even thinking of going to Nepal by flight. And still, ended up in a motorbike 🙂 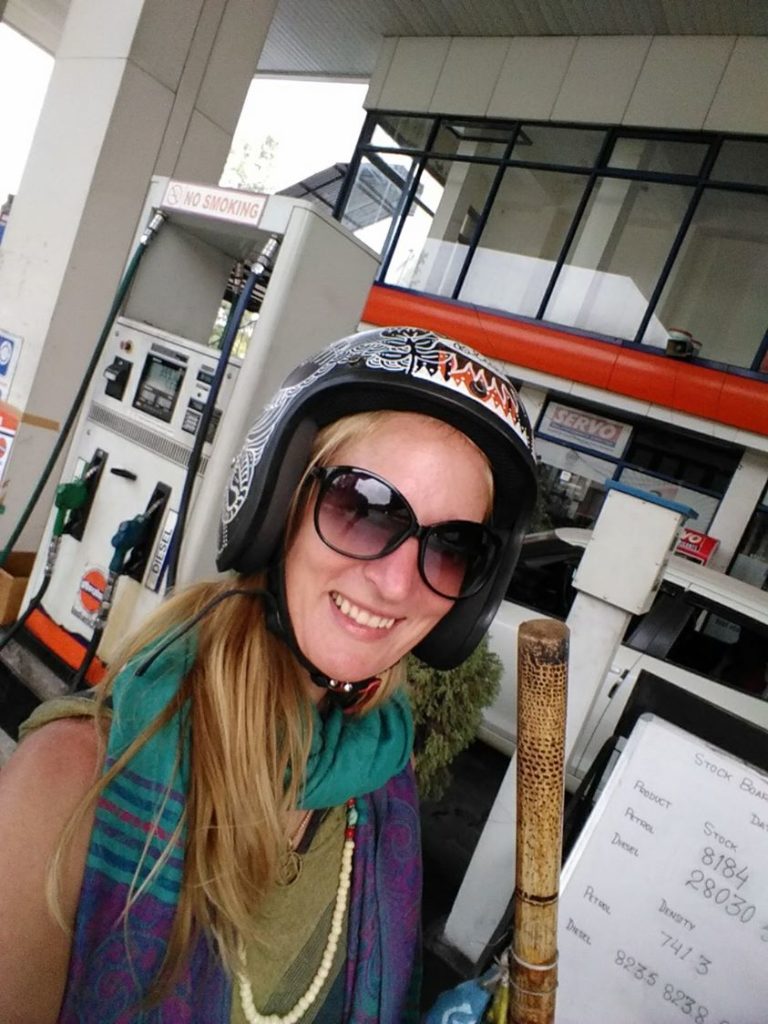 At this time I thought that I still have cc 6 days of my visa. Since he knew he had only 5 days left, to cover the more than 800 km distance in the bumpy-curvy mountain roads, we started our common journey with quite a strict schedule.

The surprise of the first day was when I learnt that this world traveller riding the bike is devoted to a beautiful social project, financed by funds raised from the people who are following his photographic work and articles. Before he used to work for a bank. But then he realized that he was a traveller and stopped resisting. Accepted the opportunities offered by life as he started to follow his passions. One of the most inspiring people I met during my journey. 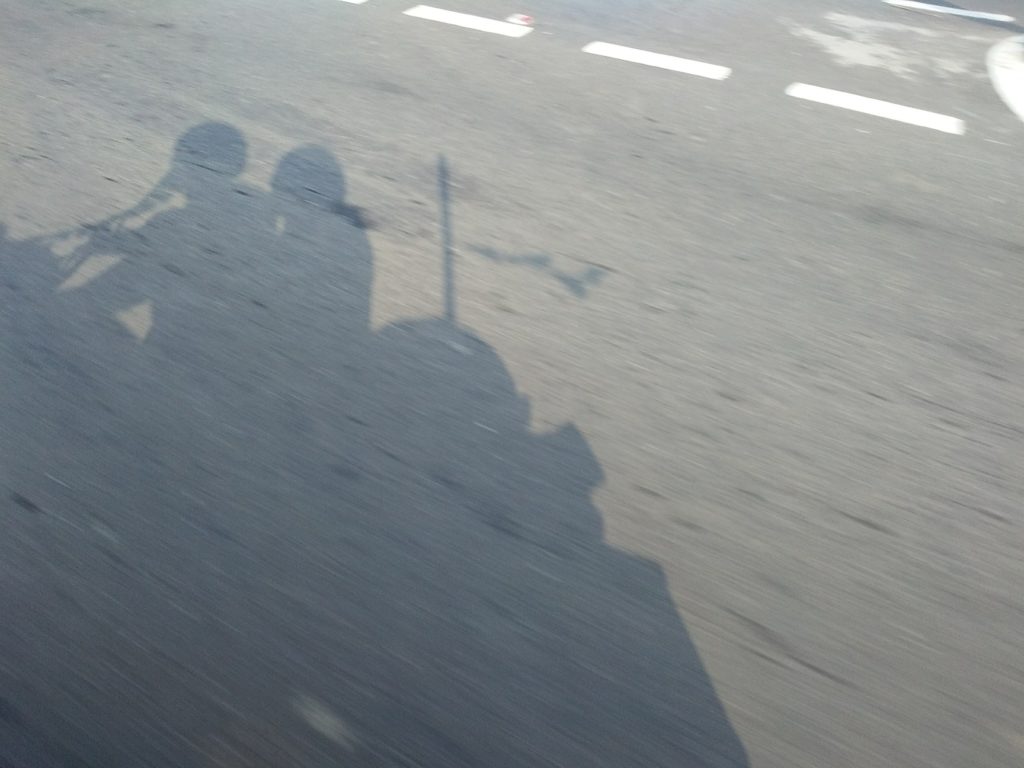 We were travelling long hours by the time we reached the border. We had quite a smooth ride, sharing silence and getting to know each other more and more. It was an oldschool ride. Since we didn’t have an offline map and our phone batteries were usually off, in orientation we mostly relied on the local people. For this it was highly required that my travel partner had quite a good command of Hindi.

We had great meals in the tiniest rodeside dhabas (restaurant) while resting on Punjabi beds. Once we even saw some elephants by the road. 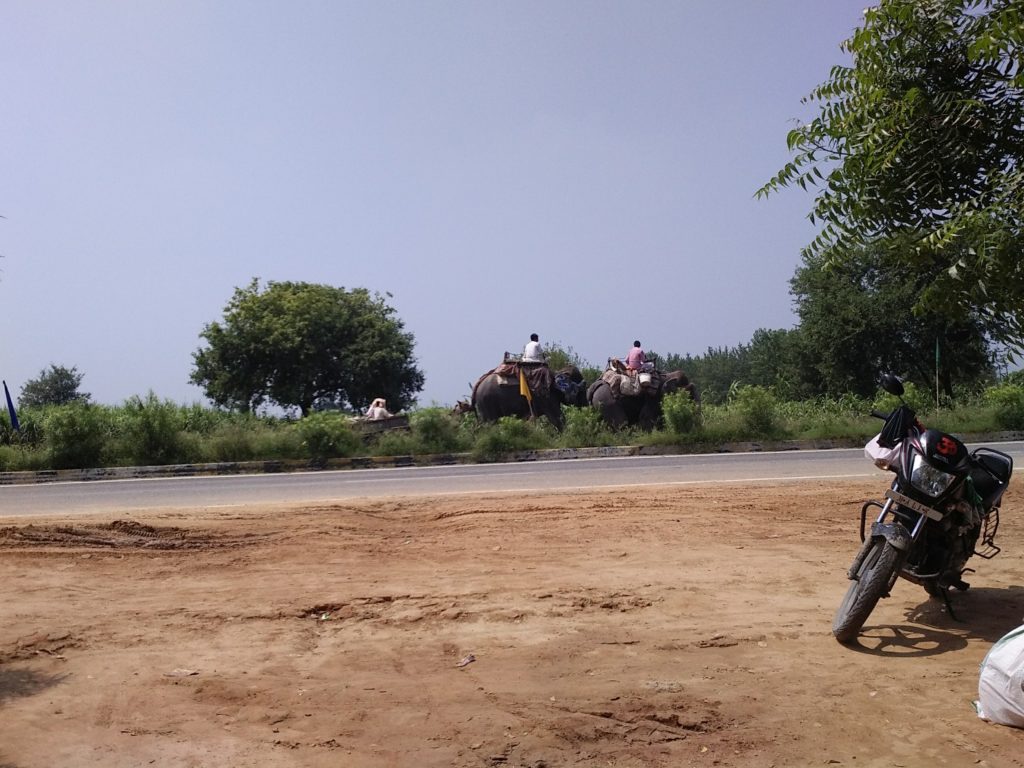 We were stopped by rain only once, and only had to drop into a repair shop once, because the back wheel loosened. There were some other challenges on the way though.

Like when one evening we reached a small muslim town (Rampur) where in the first 5 hotels we were told that they had no free rooms. We got to know only in the 6th one that since it is a traditional muslim town, some of the hotels don’t accept foreigners and others don’t accept unmarried couples. At the end we checked the bookin.com and went to a hotel which had no restrictions in their description. By this hotel wemet a man who was eager to offer some other places too and at the end one of these places worked out well.

Another interesting scene was when we stopped for a chai and samosa in another moslim village. After those long weeks in Punjab I couldn’t wait for exposing my body to some sunlight on the bikeride and also knowing that there is a man next to me, I didn’t really bother covering my shoulders. Until this time. Here, as we were sipping our chai and nibbling our samosa, soon a smaller crowd started gathering next to the chai shop. A crowd of men and some kids. No women in the streets at all. Then I needed to use the bathroom. I asked for it and someone from the chai shop lead me to the courtyard of a house nearby. By the time I finished in the small toilet, a smaller crowd gathered there too, I was walking back to my travel partner surrounded by so many people, some of them making videos of the scene. At this time I felt that after Punjab there can be still situations surprising me in terms of how local Indian people react to a white woman. 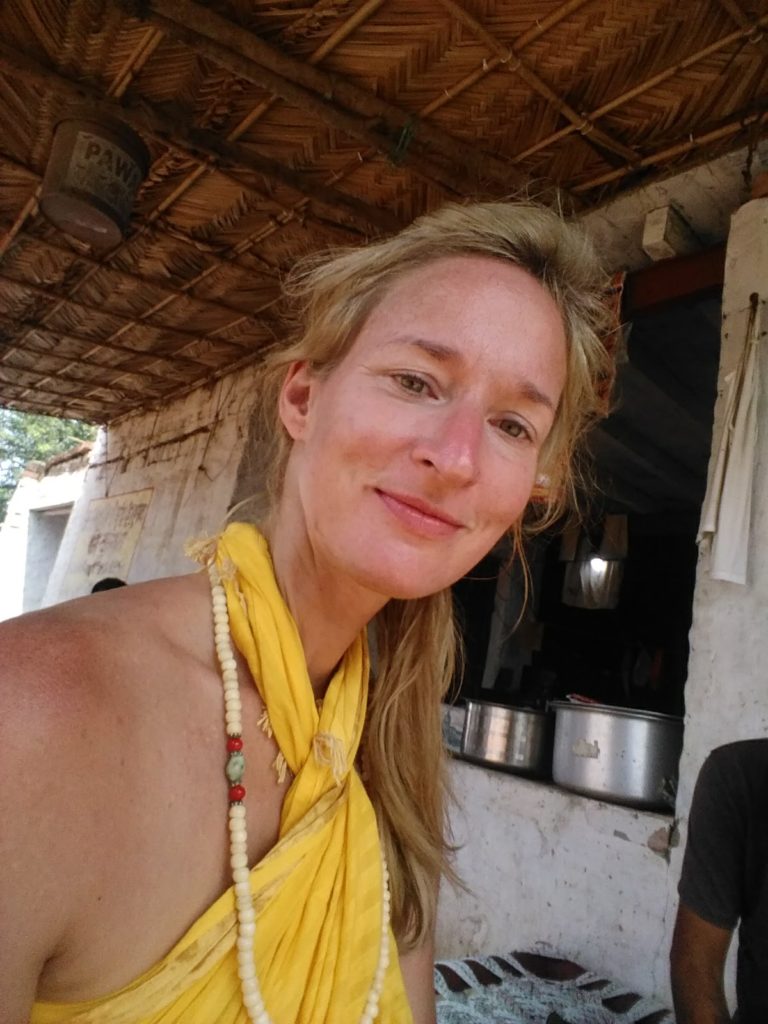 So, we reached the Indian border on the 9th of September, late afternoon, at Bambassa. This was the point when the story began really interesting. I remembered that I arrived in India on 11th July for the last time and I have 60 days. I knew that  calendar months are sometimes more than 30 days but I forgot that both July and August are like that. And what I had no idea of, that they also included the starting day in the 60 days. And somewhere in the Indian flow I forgot about that reasonable necessity to check the end date of my visa. So… I learnt right there in the immigration office that my visa expired a day ago. First they told me I need to go back to Delhi (1-2 days travelling from here) to some office where I can apply for an exit permit and pay some fine. I got almost shocked. Had no idea what to do. And felt so so lucky that I had my travel partner there who happened to speak some Hindi too. I was just sitting there in despair while he was arguing with the officers. After some time it came to light that there is another way than going back to Delhi. I can pay a fine right there and they would issue an exit permit for me. For a fine of INR 8600. Another shock. This was more than the money I earned in Punjab and however many times I practiced accepting on my journey that money is just coming and passing by, I felt this just too much. At this time it was little consolation that at least we got to know what happens if one overstays in India with one day. I paid the fine. We crossed the border.

Entering Nepal was pretty easy, even if we didn’t have the USD needed for the visa upon arrival. They changed our INR right there in the immigration office, just on quite a crazy exchange rate. Then we headed to the customs office to register the motorbike. Here came the next surprise. My travel partner purchased his motorbike in South India and since in India official matters work in quite a different was than in any other parts of the world, when purchasing the bike, he only received the scanned copy of the documents but not the originals. And also, since he was a foreigner to India, some of the documents were still on the previous owner’s name. The customs officers told he cannot enter Nepal with the motorbike with these documents. We need to leave the bike back and find another way to travel. We didn’t want to accept. Were just waiting, starting to argue with the officers again and again. Until they told that we should go to another border town nearby (Dhangadhi) and try to co-operate with the customs office there.

By this time it was dark and we were really tired, so we just went to the closest town, where we stayed in the shittiest guesthouse of all times. Slept in a bed with a whole ecosystem of various insects, after having a really delicious dinner in a small restaurant full of drunk local people. Well, one of the signs showing one has arrived in Nepal after India is that wherever one looks, can see alcohol. All the fridges and counters of shops, restaurants and even chai shops are filled with alcoholic drinks. Welcome to Nepal. 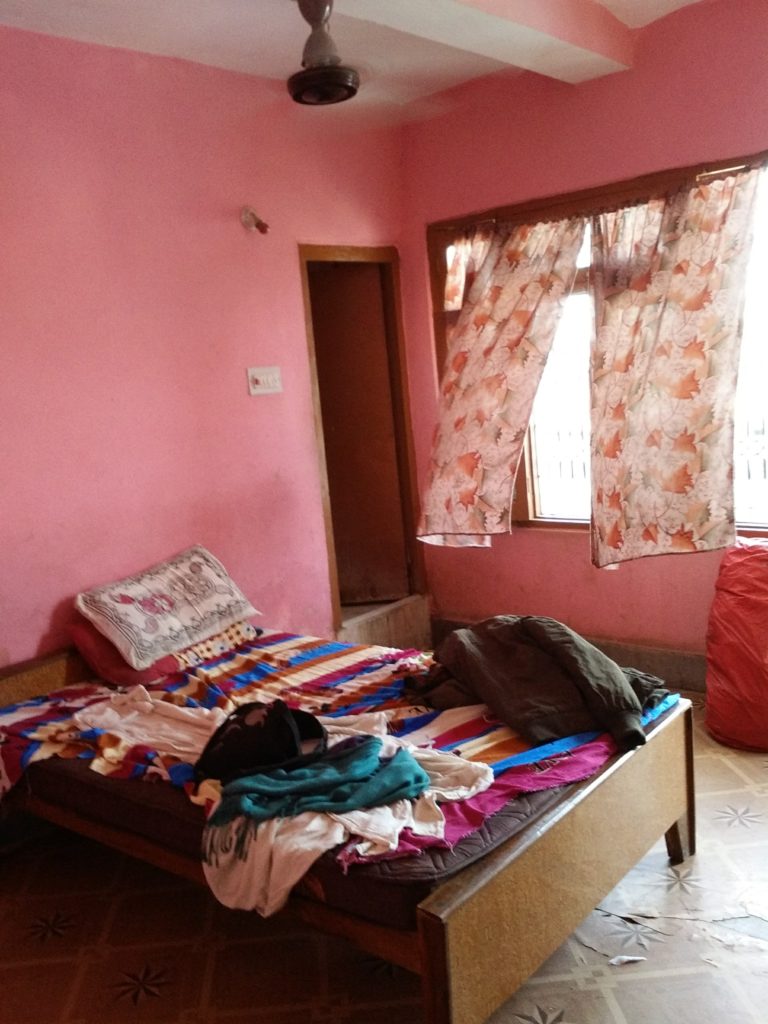 Next morning after breakfast we headed towards Dhangadhi. We soon arrived. While my travel partner went to the customs office, I was resting in one of the chai shops. After all the excitements from the previous day around my exit permit from India, by this time I was quite relaxed, trusted that we would find the ideal way of travelling forward. And it turned out just like that. In this customs office he could register the bike with no issues. The only surprise was that the customs duty for using a foreign motorbike in Nepal costs 80 Nepali rupies per day and they issue the permit only for 20 days, so he would need to go to a customs office in one of the border towns or Kathmandu after 20 days again and again. Not the best option, but still. On 10th September we all legally arrived in Nepal. 🙂

2 Comments on “The Way To Nepal”